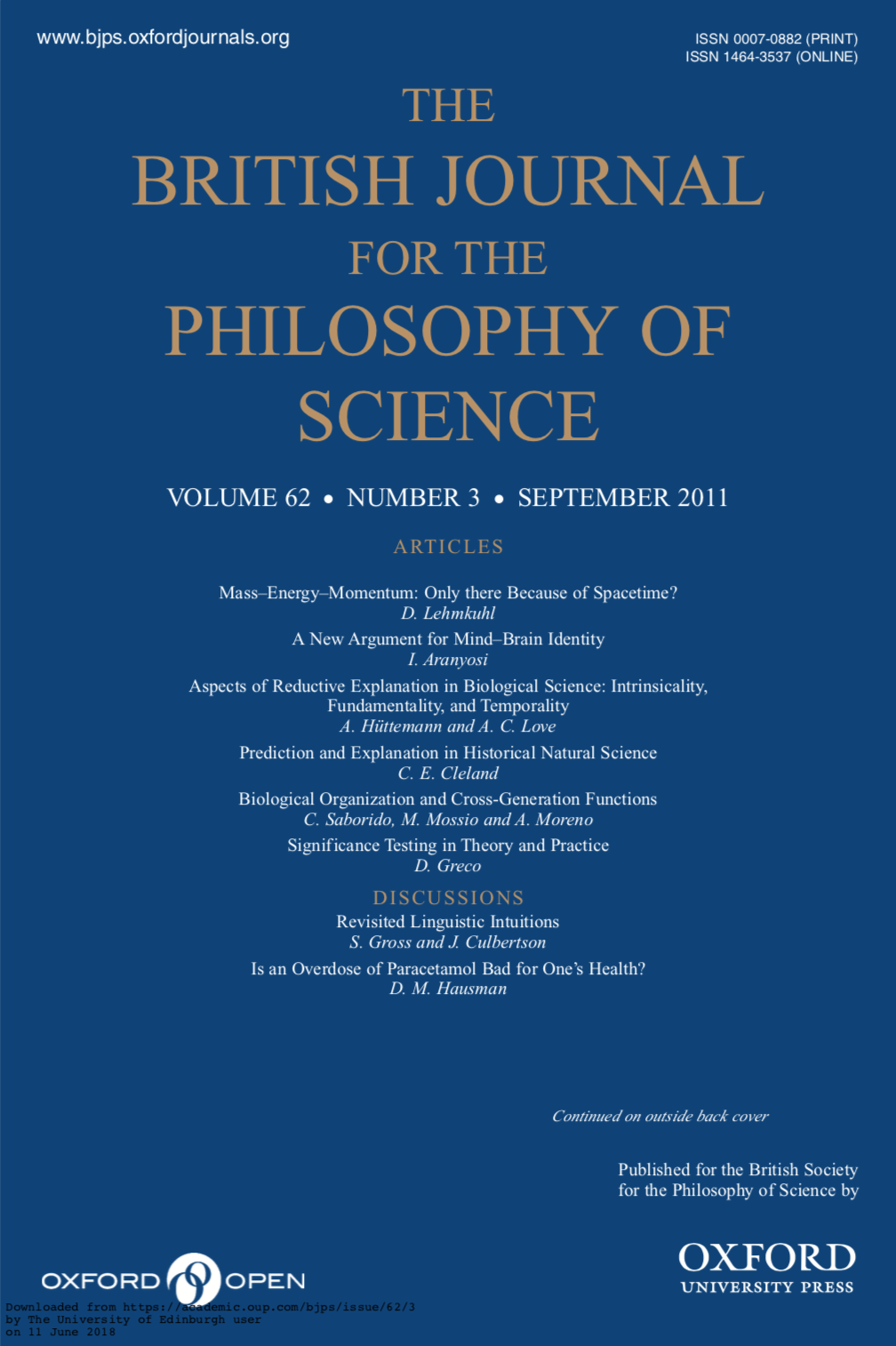 The structure of Ramsey’s argument repeats a familiar eliminativist strategy (Churchland 1981; Mallon et al. 2009; Stich 1983). First step: argue that in order for something to be an \(X\), it must satisfy a certain description \(D\) (say, beliefs must satisfy the description given in folk psychology). Second step: argue that to the best of our knowledge, nothing satisfies description \(D\) (e.g. folk psychology is false). Third step: conclude that since nothing satisfies description \(D\), there are no \(X\)s (no beliefs). Here is how the strategy is played out in the book. First, Ramsey argues for certain minimal conditions that a representation must satisfy (what he calls the ‘job description’). Second (this takes the bulk of the book), he considers the ways in which our best psychological theories use the notion of representation. Ramsey argues that none of these uses satisfy the job description associated with representation. (A wrinkle is that some representations – those posited by the classical computational theory of cognition – do qualify as genuine representations. But, Ramsey claims, classical theories are in a minority in cognitive science, and their hold on the field is shrinking.) Therefore, Ramsey concludes, at least in most of cognitive science, there are no mental representations.

That much is the negative component of Ramsey’s argument. The positive component is that the internal states and mechanisms currently labelled ‘representations’ can be re-glossed as causal relays or dispositions. Replacing representations with relays or dispositions will, according to Ramsey, have little impact on the practice of cognitive science. Empirical cognitive science can continue in roughly the same way minus talk of representational states. In a nutshell, Ramsey’s claim is that representation talk adds nothing of explanatory value to (most of) our psychological theories, and is therefore unwarranted. Mental representations are wheels that do not turn anything in psychological explanations.

Let us consider each step of Ramsey’s argument.

First, step one: the job description challenge. This involves coming up with a description (\(D\) above) of the essential or core features of representation, which we can use in assessing whether scientific theories that appear to posit representations really do or not. Ramsey highlights two conditions for something to be a mental representation: non-derived intentionality and causality. For a state to be a mental representation it must: (i) be capable of having original intentional content, and (ii) interact causally with other cognitive states. To these conditions, Ramsey adds a third (and this does most of the work for him). He claims that (i) and (ii) need to be somehow linked: the causal role that a representation plays should be determined by its intentional content. For something to be a representation it must function as such: its intentional content should be relevant to either how the system works, or our best explanation of how the system works. If the intentional content is just along for the ride, and does no causal or explanatory work, then there seems no reason to assume that the state in question is specifically representational, rather than, say, a causal relay with the same effects.

What detracts from Ramsey’s argument is that he goes on to infer a less plausible conclusion about how the content of CCTC representations gets fixed, which is conflated with the above claim about commitment. Ramsey claims that an internal model has its content in virtue of an isomorphism between its structure and the structure of the intended target system. There are two points to make about this. First, it is not clear how it helps Ramsey’s argument, it confuses a representational commitment (viz. explanation of inference requires internal models) with a positive proposal for a theory of content. Second, isomorphism-based theories of content face fearsome objections: isomorphism is a symmetrical relation, but representation is not; isomorphism is too weak a condition for representation, it entails massive indeterminacy in content (e.g. there is an isomorphism between the structure of letters in my car registration and the structure of letters of my dog’s name, but they do not represent each other; isomorphism is also too strong a condition for representation, a representation need not be isomorphic to what it represents (e.g. a crude map of the UK can represent the UK, even if it entirely fails to be isomorphic to the UK). Ramsey considers some of these objections, but he does not succeed in defanging them. Moreover, it is unclear why he needs to take on the task of defending this, or indeed any, theory of content. It is not clear how the observation that CCTC posits structured models that function as surrogates for the world in reasoning entails, or indeed lends any support, to the conclusion that the representation relation obtains because of this structural similarity. Just because I use a model that shares structure with what it represents, that does not mean that the model represents because of its shared structure. Cognitive agents may infer by examining the structure of mental models that function as surrogates for the world, but the question of how those models get their particular representational content is entirely separate (it may be causal, historical, etc.).

We will return this point shortly, but let us focus on the eliminativist part of Ramsey’s argument. Ramsey moves from the CCTC to cognitive neuroscience and connectionism. Both theories employ what he calls the receptor notion of representation: \(X\) represents \(Y\) if the occurrence of \(X\) is reliably caused by, or is nomically dependent on, the occurrence of \(Y\). At least on the face of it, the receptor notion is not particularly representational: nomic dependence between two conditions is common, but we are rarely tempted to attribute representations (think, thunder and lightning). Ramsey introduces Dretske (1988)’s account, which tries to capture what makes some nomic dependencies distinctively representational. On Dretske’s view, a state \(X\) in a system represents \(Y\) if (i) \(X\) stands in the appropriate nomic dependency relation to \(Y\), and (ii) \(X\) became incorporated into the system’s processing because of that dependency, in other words, \(X\) serves the function of selectively responding to \(Y\).

That, in abbreviated form, is Ramsey’s argument. How successful is it?

On the positive side, I think that Ramsey presents a powerful challenge to naturalistic theories of representation. He shows that a state can satisfy Dretske’s conditions without being a representation. On the negative side, I do not see how Ramsey’s eliminativist argument succeeds. The problem stems from Ramsey’s own exception, the CCTC. As observed above, Ramsey assumes (i) the S-representation-role is the sole property of the CCTC, and (ii) only an isomorphism-based account of content fulfills that role. Both assumptions appear to be wrong, and this causes trouble for Ramsey’s eliminativism.

Ramsey argues that what is special about isomorphism-based representations is that they stand in for something, they are surrogates for reasoning. But it is far from clear why a receptor based notion cannot fulfill the role of a surrogate too. And the receptors posited in cognitive neuroscience typically do: a face detector or edge detector are understood, not just as detectors in isolation, but as part of our wider model of the world, and their activity is considered an apt surrogate for the presence of distal faces or edges in reasoning. Again, the point is that the distinctive S-representation-role that Ramsey claims is unique to the CCTC and uniquely filled by an isomorphism-based theory of content is not unique to classical architectures and can be filled by other theories of content (causal, historical, etc.).

This just scratches the surface of Ramsey’s excellent book. Whether the partial eliminativism succeeds or not, the overriding virtue of his book is that it frames, and attempts to answer, important questions: What is the job description of a representation? Which of our psychological theories posit entities that fulfill that description? These questions have not received sufficient attention in a literature dominated by the search for theories of content. In his job description challenge, Ramsey makes clear how a theory of content is a distinct project from a theory of representation. I would warmly recommend Ramsey’s book to anyone working on representation.

I would like to thank Jim Bogen, Lisa Damm, Natalie Gold, Edouard Machery, and all the participants in the Pittsburgh reading group on cognitive science, as well as William Ramsey and Oron Shagrir for comments on this review.